Dogs in Heat in Cuenca, Oh My! by Star

Mom tells me that I'm fixed and that I have been for a long time. I had no idea what dogs in heat or being fixed meant until I saw some really, really strange behaviors and mom had to have "THE" conversation with me. Let me introduce you to Princesa. 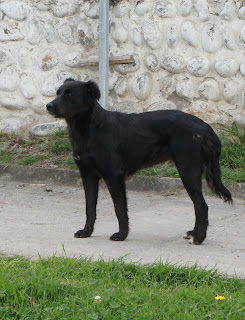 Princesa is quite the cute dog, but when we first met her she was kind of 'bitchy'. Mom explained that she was in heat and that this made her a bit bitchy. Hmmmm ... Princesa was one of those dogs we thought were street dogs only to find out that they are just outside dogs: 'dogs who are left to roam during the day but that have a home.'
We go by Princesa's home all the time as it's the nicest route to the park. For a couple of days we saw that there were many dogs around Princesa's home but then the number decreased to four. These dogs wanted nothing to do with me, thank God! but they were waiting for Princesa to come out. When she did, they were all over her and she seemed to like it. Now, these were really ugly dogs and we had never seen them before, nor have we seen them after. One of them was limp, obviously hit by a car at one point not in the too distant past, yet there he was every day for a week to create more doggies.
One day we went by and there was one dog in each corner of the house, just waiting for Princesa to come out. It was quite the site and we were sad that we did not have our camera with us. The following day we were walking on 10 de Agosto, a very busy street, and here come a pack of dogs towards us. Mom of course goes on her instant panic mode until she recognizes Princesa who was being followed by the same four dogs that had been hanging around her house. Mom scolded Princesa for being so far from her home in a busy street, as if she could understand what she was saying. But, that's mom, what are you going to do? Dad did his head shake and just kept walking ahead of us.
I wonder what kind of puppies are coming out of that mix of the four ugly dogs and Princesa. The good thing is that although ugly, these were all nice dogs, and Princesa is very pretty so it all may turn out OK. Mom wishes Cuencanos fixed their dogs more often so that there wouldn't be so many homeless or abused dogs. Yet, I think that it's what is, and we can't do much about it. Life in Cuenca is different and I just embrace it with curiosity.
Posted by Lizette Pirtle at 3:39 PM