Around Cuenca, Another GREAT Day by Star

These outings that Efrain (from MIO Tours) plans for us are just incredible! I had another wonderful day last Friday with my buddy Java.

Mom says this was a particular special tour because we got to see where some battles were fought by Sucre and Simon Bolivar and that my grandfather would have loved it.

Our first stop was El Portete but mom kept calling it El Porquete and Parquete and many other names confusing everyone in the end. But they laughed a lot with all this name calling. I tell you, these humans can be quite silly sometimes. At any rate, the views from El Portete are just magnificent and I took them all in with awe. You have to go up a pretty good set of stairs towards the monument and I led the way. 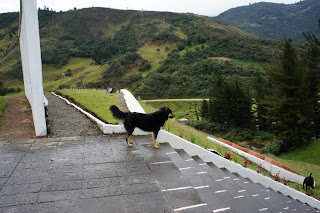 But then Java beat me to the lookout... Where the heck was I? Probably sniffing around by the monument...

Check some of the views I took in from up there... awesome, ah! 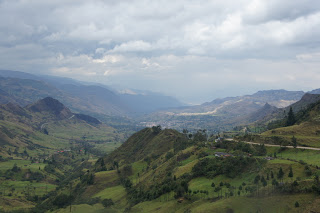 We were heading towards the area where the sun is shinning in the back... the valley of Yunguilla. But first, we stopped in Giron and went to a very nice museum to hear about the battle of 1829 between Peru and La Gran Colombia which consisted of Ecuador, Colombia and Venezuela. It was an amazing battle that Sucre with all his strategic smarts won, in spite of having less than half the number of soldiers than Peru.

Efrain had worked it out so Java and I had our own personal guards at the Museum of Giron. I never thought I would have a guard. He was very nice. His name was Diego. Java also had his own guard. 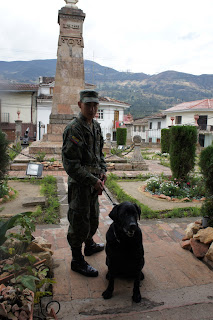 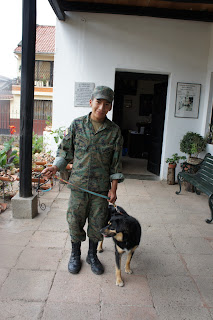 They walked us around the gardens while our parents had the tour. 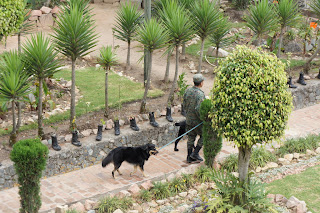 I sure would have loved to see inside though. But the gardens were indeed very beautiful. Do you see the row of boots in the picture above? The lady in charge of the museum loves to garden and uses old boots are planters... Pretty neat stuff... 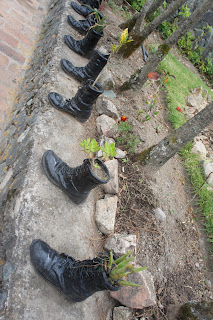 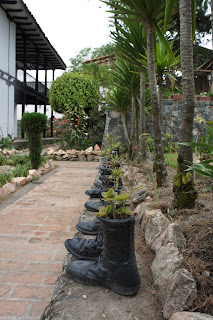 After the museum we went to see the waterfalls, but it was raining so we didn't get to see much. Mom shot some cool pictures of some mountains that looked like the pyramids and of the waterfalls, while Java and I looked out the window wanting to go running around some more. 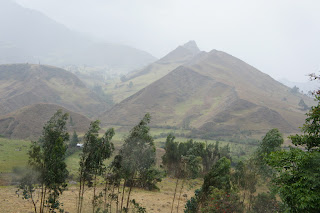 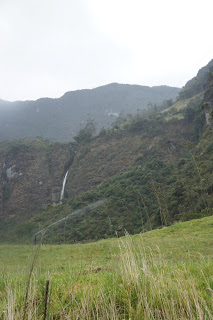 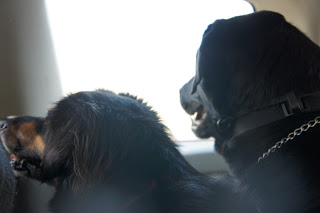 That doesn't look like rain to us? What's wrong with these folks? Do they think they are going to shrink with a little bit of drizzle? Oh well... so we went on to Yunguilla. Just before we got there we saw where a meteor had landed. Java and I wanted to go to the top of that mountain, but we had to stay in the car again! The humans didn't get out either, so I guess that was fair. 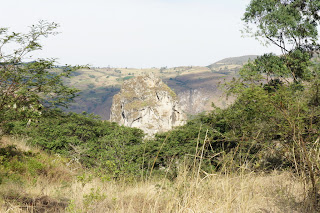 Once we arrived in Yunguilla we went to the Hosteria Sol y Agua, a very nice place where the humans ate lunch. We went for a walk around the property and saw some wild huge birds my mom called ostriches. They also allowed Java and me in the dining room thanks to Efrain. However, once again we did not partake in the meal. My mom had a salad as usual, and I don't care to share that with her. However I could smell she also had a side of french fries, but none fell down to the floor for me to savor. Dad was another story. He had trout and a huge one, and went on and on about how good it was. Now, I love fish of any kind specially trout...But did he share? No way... that was just too much to bear. 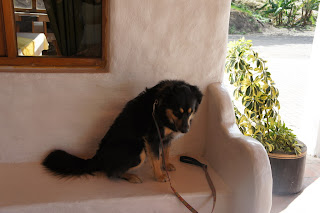 But I am a dog, what can I say? So I quickly forgot my disappointment when we walked around the place. 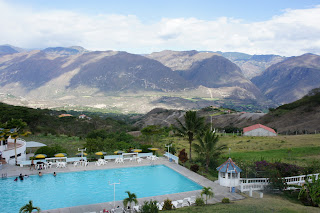 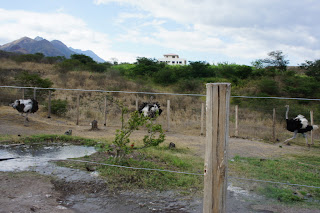 After this stop, it was time to go home. Java and I were tired so we chilled in the back of the car. Java slept and I used him as my seat to prop me up to look out the window all the way back. What we saw was just too much to explain. We were even blessed with a rainbow. Perhaps one day you will see for yourself, in the meantime I'll share some of the pictures mom took. 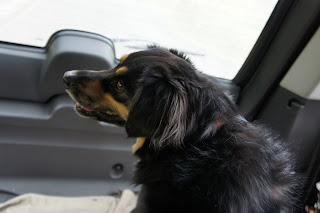 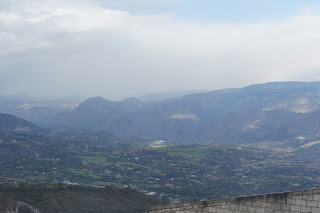 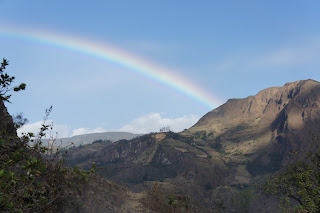 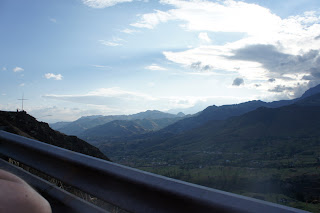 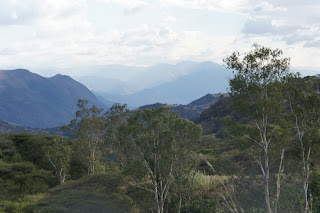 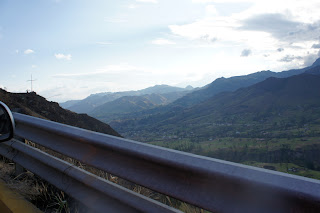 And so our trip ended here and we felt blessed and thankful for the experience. We can't wait until we have our next. Mom says we are going to Cajas National Park. But before I leave, I want to share one more shot, this time of Java, Efrain and me. 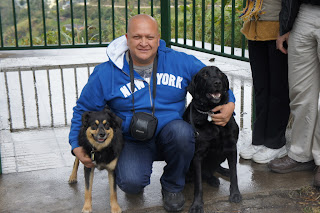 Labels: Day Trips out of Cuenca, dogs, Dogs in Cuenca