Thanksgiving in Cuenca by Star

I LOVED Thanksgiving in the States because I got to eat lots of turkey and I had my buddy Marley come to stay with us. Mom and dad and Rhonda sat around after dinner and they talked and talked and all was happy and everyone was at home. Thanksgiving in Cuenca left a lot to be desired, at least for me. For mom and dad this Thanksgiving was different but very enjoyable. They went out to Villa San Carlos and had a feast. Dad had lots of turkey, but he didn't bring me any. Mom had the fixings and the veggie lasagna, and I wouldn't be interested in that so I'm not angry that she didn't bring left overs; with dad, that's another story. They bragged and bragged about the food and the company and I had to stay home by myself so I guess I could be angry with both of them.

Mom explained to me that we have a lot to be thankful for and I know that's true. We take so much for granted every day. Thanksgiving Day here in Cuenca reminded us of that. For one, we didn't have any water all day and mom and dad had to take their baths with buckets of water that mom keeps just in case. Mom is too impatient to heat the water up in the stove so she used mostly cold water to bathe and she screamed as she poured it on her... it was very funny. Dad is the sensible one, so he waited patiently and methodically to bathe without a fuss. The only thing I cared about was that they had enough water for me to drink and they did so all was well. Not having water during Thanksgiving made mom be thankful for every day we do have it, which it's most days.

These last few days have been of thanks giving. We have a wonderful lady who comes to clean twice a week. Her name is Norma; I really like her and so do my mom and dad. She has quickly become part of our family. She has a cute boy, Mateo, who comes with her sometimes. He talks incessantly and he is very sweet. 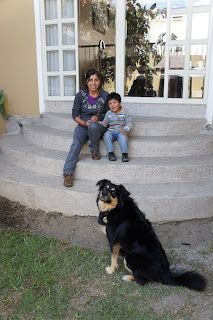 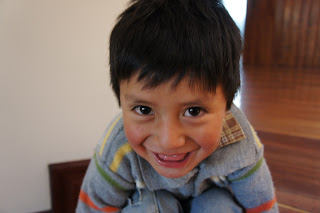 A week ago Sunday after Norma was finished cleaning the house we took them to their home and we learned a lot about their lives. Norma has a very supportive husband and she goes to seamstress school every day. She loves to sew. They live about 45 minutes away by car in the mountains close to Cuenca. Norma has to be out of her house by 6 AM every morning so she can get to class on time. She takes the bus every day and because the buses come full she waits and waits and it takes her 3 hours to get to town. The roads to her house are dangerous and so are the buses. Going back home is the same ordeal. However, we never see Norma upset or anxious; she is always smiling, always happy. Mom says she reminds her of my sunny disposition how I not only accept things as they come but embrace life with joy.

Norma loves to study and is learning how to start a Cuy business. Today she had to leave early because they were teaching her how to kill the Cuyes (Guinea Pigs). This made mom sad but the Cuy is a staple in the Ecuadorian diet so I told mom to get over it. I would definitely eat a Cuy if given the chance. They are probably delicious. Maybe my dad will take me one day without telling mom.

However, I did miss Thanksgiving Day this year and hopefully my sad eyes when mom and dad returned last night will make them feel guilty enough for them to make me turkey soon. 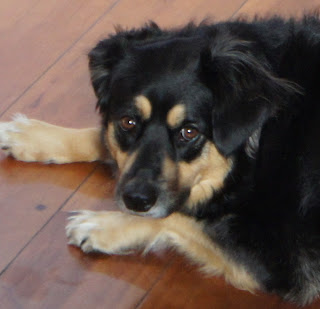 Cuenca Knows How to Throw a Party by Star

During the first week of November Cuenca celebrates its Fiestas, and Cuencanos know how to throw a party. It's a whole week of celebrations with parades, art shows, music, dancing, fairs, carnivals and circus for the children, fireworks and visits by government officials.

I only went to the best day of the Fiestas which was the 3rd of November when Cuenca celebrated its independence. But mom and dad enjoyed other days and showed me the pictures; it looked like a lot of fun perhaps next year I can go to all the activities. 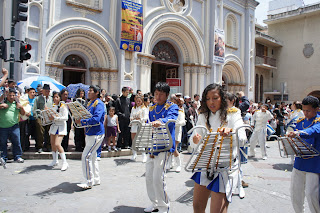 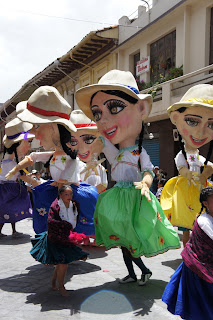 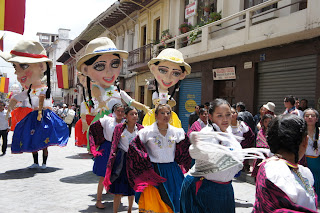 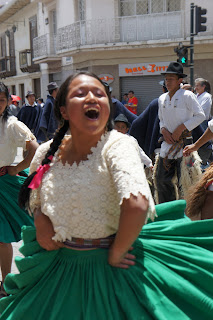 Mom especially liked the kids. She always has a soft spot for children and dogs. 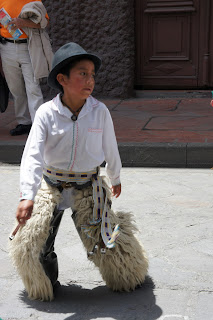 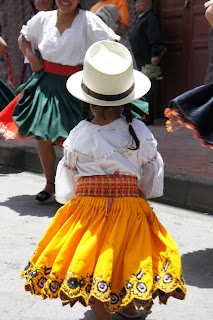 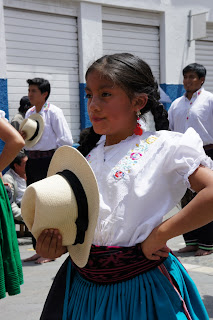 Thursday, Nov 3 started early. We wanted to see the military parade, but mom and dad had been invited to attend the presentation of a book called "The Flight of the Hummingbird" to the vice president of Ecuador, Lenin Moreno Garces at the Parque San Sebastian. Both events were scheduled at the same time, and I'm  glad we went to the one on San Sebastian as I got to see the vice president up close and personal. 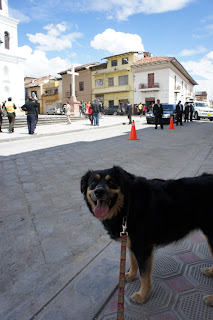 Here is vice president Moreno arriving. It was shocking how close they let people get to him. We tried to get a good look but I really couldn't so mom had to show me the pictures. She says I am too heavy to pick me up. 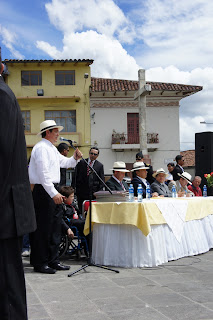 Mom was really impressed with the vice president's speech. She is never captivated by politicians so he must have been really good. She said that he talked about quantum physics, about our oneness and about the hummingbird's wisdom. It was all very nice, she said; but there were other speeches, and I was getting bored so I went to see a puppy who was very cute. I really like puppies. 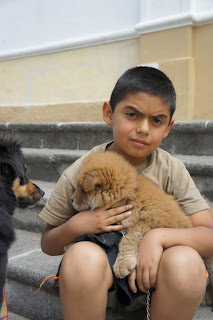 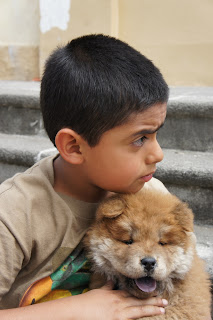 After I played with the puppy I had fun with LT's boots. Remember the LT who brought me my treats from the States? Well, she joined us and she had a great pair or boots on... very colorful. I like LT. 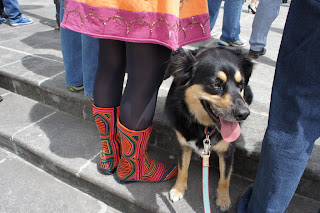 But, as colorful as LT's boots were I got distracted by this cute little girl who was wearing some Minnie Mouse ears and then she started to dance. It was quite the show. 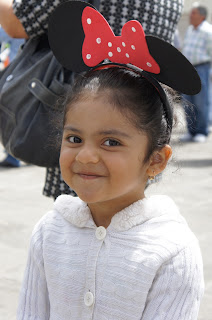 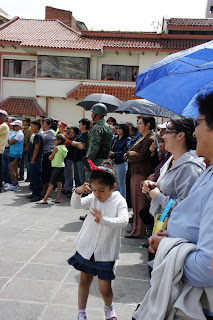 The event was long and I was getting hot and bored until this handsome Basset mix came to my rescue. 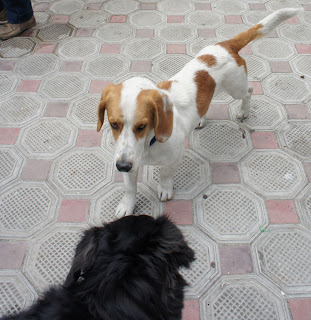 I first thought he was really nice, but then he got a bit pesky so I tried to ignore him but I think he fell in love with me because he followed me everywhere. He even offered me some flowers. I have to admit he was really cute especially among all those beautiful flowers. 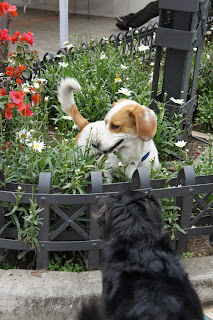 From there we went down the street to Parque San Blas where they had the food stands. It all smelled so good. They were cooking the guinea pigs or cuy... the poor things.

After quickly checking out these culinary activities we headed to the Escalinatas to check out the art students' work. Mom had to take lots of pictures while dad and I waited patiently for her. You can see us beyond the mask by the bridge. 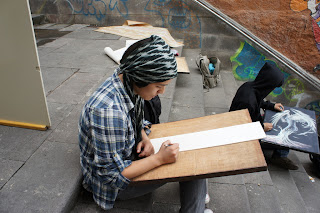 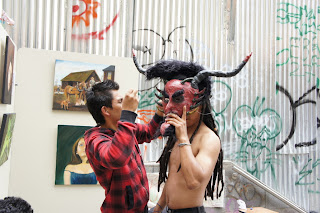 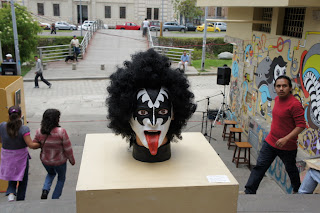 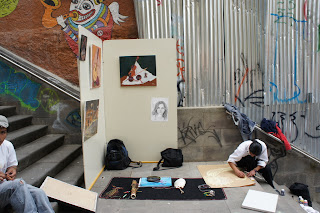 As we headed home we went by the Parque de la Madre and here again there was more celebration and dancing. It was quite beautiful and happy. 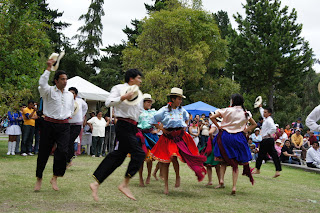 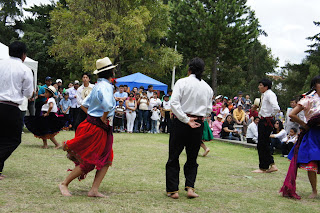 It was a great day and I can't wait to next year. Perhaps I can convince mom and dad to let me enjoy the entire week. Life is a lot of fun here in Cuenca. 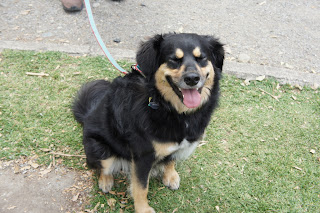